Christiansen: “Analyzing scenarios without considering the possibility of an opposition victory is irresponsible” 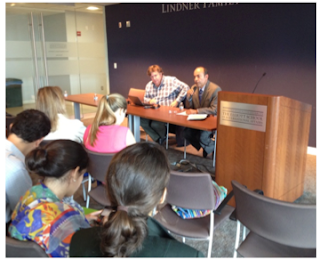 Washington D.C., -­‐ Luis Christiansen, the president of Consultores21, a top polling firm in Venezuela, and Gerver Torres, economist and Gallup consultant presented an outlook of the Venezuelan political situation 20 days before the presidential elections, in an event held in the Elliott School of International Affairs at the George Washington University. According to the data presented by Consultores21, there is a real possibility that opposition candidate Henrique Capriles Randonski wins the elections on October 7. When registered voters were asked: "Suppose the presidential election was held today. Who would you vote for, Capriles or Chavez?" the poll, at August 31, shows a 48% of vote intention for Capriles, while President Hugo Chavez earns 46%. In addition, Consultores 21 presented the results of their September 15th research, using a "secret voting simulation" where the numbers are Henrique Capriles 48,9% v. Hugo Chavez 45,7%, a 3,2% lead for the opposition candidate.

Capriles Radonski has been successful at raising his support for 4 percent points since he began campaigning for office in June. Yet the trend continues to grow, while President Chavez’s support has stabilized below 50%.

“The opposition is in its best historical moment,” said Christiansen, who contrasted these results to those of previous presidential elections in Venezuela. He continued: “Compared to Manuel Rosales (former presidential candidate), Capriles Radonski shows a greater strength facing Chavez.” In 2006, Rosales support accounted for 40% and Chavez's for 55%.
The Venezuelan opposition has presented a growing trend in National Elections since the 2007 referendum, when the Venezuelan population rejected in the ballots the Constitutional Reform introduced by President Chavez. Later on, in the 2010 parliamentarian elections the opposition secured the majority of the popular vote (52%), even though of the majority of seats in the National Assembly were for the government candidates.

Consultores21 also found that that unemployment and economy are among the issues that most affect the population today, and people directly blame the government and the President for these problems. Capriles has also made progress in cutting off Chavez's lines of attack on issues such as Misiones: 58% of Venezuelans believe that Capriles Radonski will not eliminate President Chavez’s popular social programs.

Since different pollsters in Venezuela show apparently wide dissimilar results, Christiansen concluded his intervention by explaining why he thinks there are more similarities than differences among pollsters. First, all of them agree on that the vote intention in favor of President Chavez is between 46 and 49%. Second, in no case does candidate Chavez go over 50% in the vote intention. This is, according to him, the key variable in analyzing electoral scenarios in Venezuela. Third, some polls report higher shares of undecided voters, partly because they do not press respondents as hard to make a choice. However, the number of undecided is always higher than the gap between the two candidates. This means that if the undecided people make up their minds before October 7, they could alter the forecast in favor of any of the contenders. And, since the campaign started, undecided voters have tended to move towards Capriles.

Gerver Torres analyzed post-election scenarios. Torres analyzed the data and indicated that Henrique Capriles will win with a solid majority on all the urban areas of the country. He thinks that in case the opposition wins, transition might be smoother than expected because Henrique Capriles Radonski is a strong candidate that will be able to gather all political forces in the country. Torres believes many government officials and supporters of Chavez will shift to the opposite group with no hesitation. However, if the current President wins again, Torres assured the government will become more radical, and nationalizations will reach the banking and health sectors. There is always another scenario, that Chavez wins but he dies in office, in which case a new election must take place in 30 days. In this hypothetical scenario, Capriles will be in a relatively stronger position than he is today to take the Venezuelan presidency.

The event was co-­‐organized by Venezuela Perspectives, a student organization focused on raising awareness on Venezuelan issues, the Latin American Program of the Elliott School of International Affairs, and the Center for Democracy and Development of the Americas (CDDA).